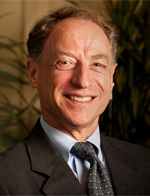 Mr. Mark was born and raised in New York City. During his lengthy career he has tried many high profile cases in state and federal courts throughout the country, and he has successfully argued numerous federal and state appeals. He has been an active member of a number of professional associations, including the Colorado Trial Lawyers Association where he chaired the Amicus Curiae Committee that oversaw the preparation of “friend of the court” briefs filed in important cases on behalf of the organization. He has also served on the Executive Committee of the Board of Directors of that organization.
Mr. Mark and his wife, Laurel, have been active supporters and members of a number of community and charitable organizations, including the Make-A-Wish Foundation of Colorado.